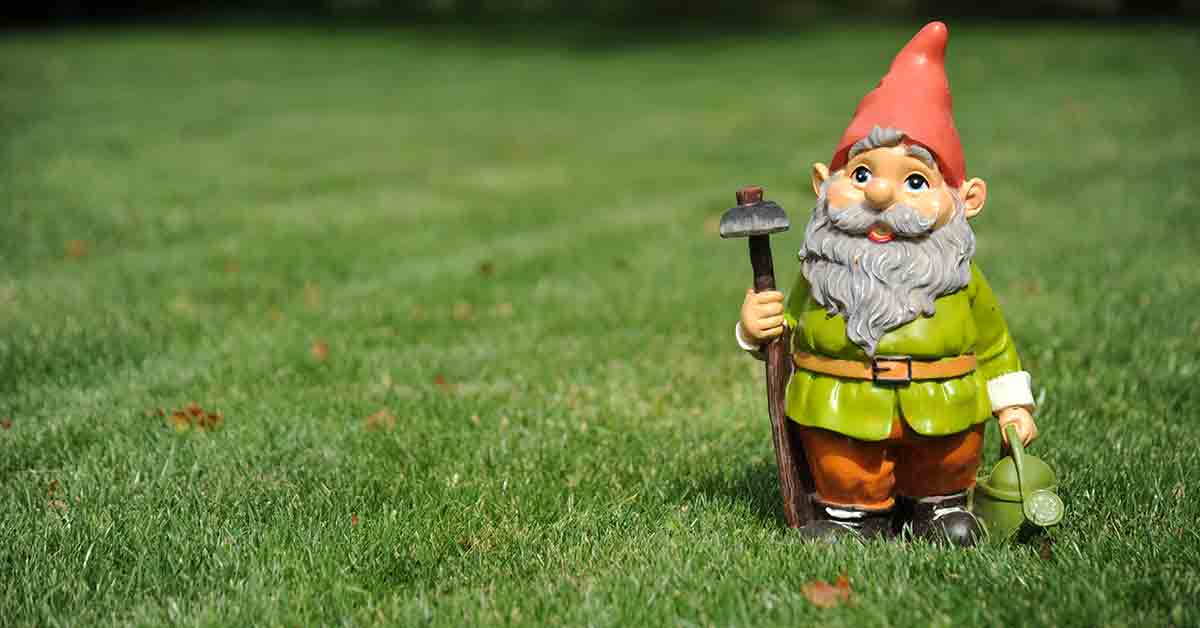 Everyone’s familiar with garden gnomes: they’re cute, funny, and a great personal touch to that beautifully landscaped yard. In recent years, popular films such as Gnomeo and Juliet have brought everyone’s favorite lawn ornament to the forefront of popular culture. But where did they come from? To help ease a curious mind, we’ve put together this post highlighting the history of lawn gnomes and their uses. First, here’s an overview of the different categories of lawn gnomes:

Gnomenclature: The Categorization of Yard Gnomes

Garden gnome-enthusiasts distinguish between the traditional and classic garden gnomes made of clay, and the garden gnomes mass-produced today, made out of plastic or concrete. Animated gnomes, or traditional gnomes, are typically made of clay, ceramics, or plaster. Un-animated garden gnomes consist of inferior materials. When decorating the lawn with these cute little figures, remember that some of them are gnome-adic (meaning they prefer to move around), and homeowners and gardeners should take care to rearrange their gnomes from time to time.

Three Categories of Garden Gnomes Based on Activity

Garden gnomes exist in three categories based on their activities and postures:

Worker gnomes usually hold working tools related to horticulture. These gnomes commonly hold things such as watering cans, spades, or pickaxes. They typically have an upright posture and look ready to work on that garden.

Leisure gnomes have relaxed postures, and they hold items related to relaxation such as a fishing pole. These gnomes are not quite as useful as their working counterparts, but they’re cute and fun to look at.

These gnomes are the youngest of the gnome family, and they typically hold objects that indicate their interest in culture and education (such as books or paintbrushes).

The most traditional garden gnome has gnormal proportions, made from clay, and is handpainted with care. These gnomes are specifically meant to withstand outdoor weather but should come inside under extreme weather conditions. These gnomes have cheerful faces, a red cap with a bent tip, and face whiskers. Also, classic garden gnomes wear buttoned jackets or vests, and their sleeves are visible and turned-up at the end so that the dwarfs can help their owners when needed.

No Gnomes About It: The German Origin of Garden Gnomes

Garden gnomes are a fun and cute way to add whimsy to your home’s landscape!

Before diving into the history of garden gnomes, it’s essential to look at their forefathers: gnomes themselves. Gnomes were first described by Paracelsus, a 16th-century Swiss alchemist, and astrologer. Paracelsus believed that spirits lived among humans. He divided them into four categories, which corresponded to the four types of elementals: air elementals were called sylphs, water elementals were called undines, fire elementals were known as salamanders, and earth elementals were known as gnomes. Paracelsus described gnomes as “very reluctant to interact with humans and able to move through solid earth as easily as humans move through the air.” Paracelsus also hypothesized that gnomes helped plants grow in human gardens, despite their avoidance of direct contact with humans. Since Paracelsu’s first description in the 1500s, gnomes have appeared in multiple different myths, stories, and folklore across the world.

While people as far back as the ancient Romans have placed statues in their yards and gardens, the garden gnome is a relatively new lawn ornament. In the late 1700s, “house dwarves” (small figures) were famous in Germany and Switzerland. House dwarves consisted of wood or porcelain. Many people associate them with superstitions related to “little folk.” At the time, people believed little folk, or dwarves, helped humans in the home, on the farm, even in the mines! Phillip Griebel created the first real garden gnome in the early 19th century.

Gnome Man Is an Island: The Spread of Garden Gnomes Across Europe

Garden gnomes quickly gained popularity across Europe throughout the 19th century. Sir Charles Isham, an English explorer, visited Germany in 1847. During that trip, he purchased 21 clay garden gnomes from Phillip Griebel and took them back to England. One of those garden gnomes, Lampy, still exists today and is on display at Lamport Hall in Northamptonshire, England. According to legend, Sir Charles’s gnomes lived happily on his land until his death. After Sir Charles died, apparently his daughters shot his beloved gnomes with air rifles, and Lampy was the sole survivor.

Sir Charles’s introduction of Griebel’s gnomes to England resulted in a business boost for Griebel. Soon after, Griebel couldn’t keep up with the demand and had to stop manufacturing other garden statues to focus on gnome production.

The Fall and Rise of the Garden Gnome: 20th-Century Woes

Garden gnomes fell in popularity during and after World War I due to hardship. However, beginning with the release of Disney’s Snow White and the Seven Dwarfs in 1938, garden gnomes started to gain traction along with the recovering economy. Unsurprisingly, due to the extreme hardships caused by World War II, garden gnomes fell in popularity once more in the 1940s and 1950s. However, in the 1970s, mass manufacturers of lawn ornaments began designing gnomes in humorous postures. However, for gnome enthusiasts, these mass-produced yard ornaments paled in comparison to their traditional ancestors. Still, they grew in popularity.

In the 1990s, the “traveling gnome” prank was born. The prank involved stealing a garden gnome from a friend or neighbor and then sending the owner multiple pictures of their beloved gnome in various locations before returning the gnome to his rightful owner.

While plenty of manufacturers mass-produce plastic or cement garden gnomes for use in contemporary yards and gardens, the original terra cotta gnomes designed by Phillip Griebel in Germany are still available for purchase.

Does your dream yard incorporate garden gnomes? What about a water feature? A local floral oasis? Desert Environments in Scottsdale has over 25 years of landscape design experience in the area. Mike Kiesler, the company’s founder, specializes in blending custom landscape designs with the local environment and neighborhood. Call today for a free consultation and make your yard a retreat, complete with funny little garden gnomes!